The Beauty from Falling Down

When I was tiny, I would cry when my Dad tried to throw a ball to me. Not a hard one, but one of those big red rubber balls that even toddlers could abuse. Unsurprisingly, I turned out to be the worst batter on my little league team. In my sole season, I only hit the baseball once. Inadvertently.

Yet somehow, I grew up to love basketball. Because I worshiped Kareem Abdul-Jabbar of the 80s Lakers, I developed a hook shot. It is neither graceful nor accurate, but serviceable for the average pickup game.

What I lack in athleticism I make up for in appearance. Looking like you know what you're doing is more reassuring to others than actually knowing what you're doing—also true for much of life. Just ask any politician. 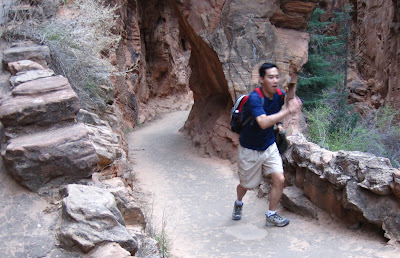 This is me running in a Utah national park. See that motion blur of my arms? Pump your arms really fast; it provides the illusion that you're speedy. 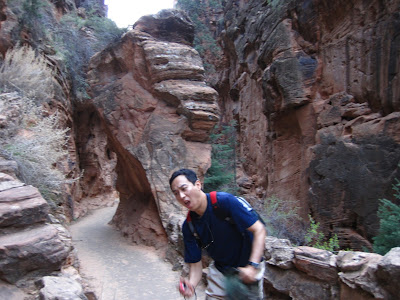 Zoom in on my stupid face. Yeah, blow this JPEG puppy up to 300% magnification. Don't worry, your browser won't crash.

That is the visage of an intense athlete. It says, "I don't care if my kidneys are cramping up and there's lactic acid in my hippocampus, I'm racing for the trophy."

However, physical exertion does have its pitfalls—with emphasis on the second syllable.

In recent years, I've been running. Off and on. Probably more off than on, but let's not tell anybody that.

Running in LA is a job that merits hazard pay, generally reserved for those who enjoy using their bodies to stop cars. My partner and I both have been almost-hit by the metal bully. One driver was on his hand-held phone; the other was just not looking. After one close call, I chided my partner for not being more careful.

"But I had the right of way," she argued, arms flailing.

Cars aren't the only predators of runners in the city.

One recent afternoon, we were jogging in the neighborhood. The sunset neared, painting mauve across the sky. My body, fed by a second wind, felt strong.

Typically, the hardest part is the first 15 minutes. That is a period of torture. My knees ache, my lungs burn, and my bowels detach from their moorings. Then gravity lightens, and I settle into a groove. My breathing evens out, the hurt subsides, and a higher-octane fuel pours into my legs.

The unlit residential street darkened, but I arrogantly shifted into a higher gear. Watch your back, Usain Bolt.

Then I met this. 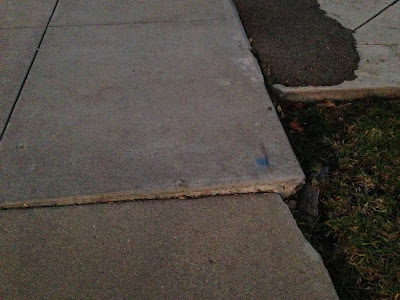 That is the jagged mouth of unparalleled evil. I'm sure Usain Bolt would've negotiated that pavement and won. But there's a reason why he has medals and lucrative endorsement deals, and I have ... a blog.

The tip of my shoe caught the crack, and I flew.

Sometimes when you're facing an impending disaster, time slows. While floating, I remembered the last time I broke a hard fall with my hands. It was during a basketball game in eighth grade, and I ended up with a fractured wrist in a cast.

I was still midair when a second thought occurred: my insurance sucks, so I better avoid another hand fracture. My decision was to roll to the right. I don't know why. Maybe I had seen too many action movies where, no matter how fast a car is racing, the hero always jumps out unscathed by rolling off the momentum. It's all about technique, you see.

And my right hip smashed into the pavement first. Jackie Chan I was not.


People tell you to run for health. That is clearly one of the biggest lies ever told, right up there with "Mortgage-backed securities are safe."

There I was, flat on my back, in pain, wondering if my hip had cracked. I'm getting old, after all, and old folks are prone to such tragedies. I lay there and waited for the agony to end. Eventually I got up and limped home on my own power.

Something sublime did emerge from all this. Great suffering produces great art.


I took so many art history classes in college that I was two classes away from earning a second major. And this bruise, in my scholarly opinion, was the David Hockney of bruises: colorful, bold strokes, and, most importantly, epically sized.

It was not merely a work of art; it was performance art. Organic and evolving. Over the next days, the angry swaths shrank into a smear of pastel purple. At one point the bruise resembled the profile of the Dalai Lama. There is beauty in everything. In the end, I decided the injury was an acceptable cost of the artistic achievement—singular and unintended, like my only hit in little league, but an achievement nonetheless.