Oooh That Feels So Good I Can't Keep My Eyes Open

January 17, 2018
We usually go to the animal shelter that's within walking distance of our home, but this past Friday we drove to a couple of other shelters: West LA Animal Shelter and NKLA. On Sunday we went back to the same two shelters to look at the same dogs. Again.

Most of the dogs at the two shelters were pit bull mixes, at least 90%. That gave us mixed feelings. We love pit bulls, but it was sad to see so many languishing in the cages. 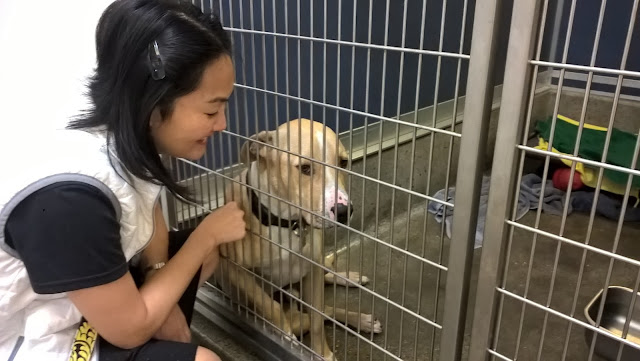 The yellow dog above is Max. He is 1.5 years old and supposed to be energetic but was quite mellow when we saw him. He would lean against the cage, let Michelle stroke him, and close his eyes. He was either super sleepy or trying to better enjoy the massage. Max has been adopted. Some lucky human got a swell dog.

There were many lovely dogs, but I'd like to plug a few especially nice ones. 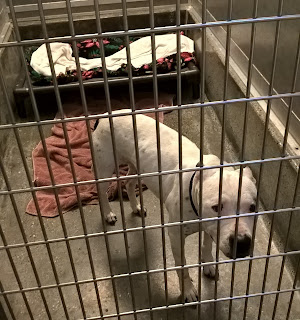 The cutest thing about Frances is her wrinkled face. It makes her look so worried. She's 38 pounds and two years old.

And there's Sprout and Murphy. They are both gray pit bull, 50 pounds, and three-years-old. The shelter can be a chaotic environment with jumpy and barky dogs. When one dog gets taken out for a walk, the others left behind often go berserk. Sprout and Murphy were calm. Whenever I went up to their cages, they would come out of their nooks and wag. Always welcoming and eager to interact. They are both available for adoption or fostering.

That's the thing about dogs. They really like people. Maybe too much. If you watch TV shows like Pit Bulls & Parolees on the Animal Planet channel, you know what I'm saying. Often times you'll see abused dogs who still remain waggy when they are approached by strangers (e.g. the rescuers). Despite their awful experiences, the dogs just want to be your friend and be loved by you. Heartbreaking and heartwarming at the same time.

Friends, spouses, and children may all abandon you, but if you treat a dog right, it will always stick with you.