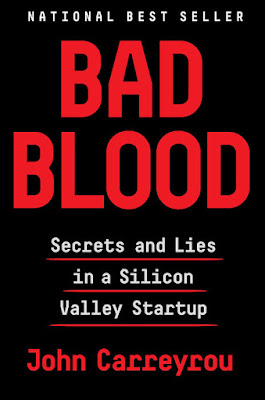 It's not everyday that I stay up all night to finish a book. In fact, I can't remember the last time I did it prior to reading Bad Blood by John Carreyrou. He is the Wall Street Journal reporter who broke the story on the fraudulent rise of Theranos, a once-hot Silicon Valley startup.

Before I got the book, I was actually not that interested. The Theranos story had garnered intense media attention, so I assumed that I already knew the sexy contours of the scandal. When I noticed that, among the 100 books on my Goodreads to-read list, Bad Blood had the highest rating (4.4), I figured the book deserved a shot. Bad Blood is one of the best stories I've ever read.

Summary: Elizabeth Holmes, the young founder of the company Theranos and a Stanford dropout, captivated everyone by promising a revolution in healthcare technology. Theranos claimed that its small device could run hundreds of tests using just one drop of blood. Rich and famous people bought the pitch from Holmes, a charismatic blonde with a startling deep voice. She was anointed the valley's shiniest new celebrity and being compared to Apple's Steve Jobs, an image she cultivated. Theranos, majority owned by Holmes, was valued in the billions.

The problem was: the device never worked. Not even close.

After Carreyrou's reporting revealed the truth, Holmes fell from grace. She has a negative net worth now, has been severely disciplined by the SEC, and is currently being prosecuted by the Department of Justice. Theranos, as a company, is in the past tense.

One of the most exciting movies I have seen is Too Big to Fail, a story about the financial crisis that led to the Great Recession of 2008. The movie transforms a dry, arcane subject into a thriller as if the world were facing a nuclear holocaust. Bad Blood narrates with a similar relentless urgency. Despite factual constraints, the book reads like a thriller.

As Carreyrou portrays her, Holmes was not evil, though her sins are quite unforgivable. Every startup puffs itself up, except in this case the lies hurt people. If you deliver false results from blood tests, people can die. In the end, Theranos had to throw out two years of test results from its device. Two years. That's tens of thousands of tests on which people relied for medical decisions.

No one will dispute that Holmes was extraordinarily ambitious and hard-working, but similar to many go-getters, she was ethically ruthless. Most likely, Holmes did not set out to defraud, her proclamations to do great good sincere. She hoped that people who were squeamish of blood draws, like herself, would no longer fear the procedure. Patients might even do the draws at home and zap the data to Theranos for analysis. The disruptive technology would reshape the healthcare landscape and bring us closer to a Jetsonian world. The masses would rejoice, and angels would sing.

In reality, it quickly became clear that the Theranos device, with its repeated failures, could not deliver the futuristic vision. Still, ethics never held back Holmes. As people told the queen she had no clothes, she always insisted that she wore the most extraordinary gown. Theranos squeezed out employees who questioned its practices, leaving the company with yes-people incapable of keeping Holmes honest. The ones who stood up to her were bullied into silence. Threats of lawsuits backed by Theranos's massive warchest and led by David Boies, one of the country's most illustrious lawyers, intimidated potential whistleblowers. The saddest story probably belonged to Ian Gibbons, Theranos's chief scientist. He challenged her and as a result suffered an even worse fate.

Amidst the chaos, many of Theranos's early, big-name supporters stuck with the company. Their loyalty, though foolish in hindsight, is somewhat understandable. They were charmed by Holmes and caught up in the frenzy. In the famous words of The X-Files, they wanted to believe. As Carreyrou points out, investor greed makes people fearful of missing out on The Next Big Thing.

How did Holmes ever believe that she could get away with massive fraud? Blood tests are, after all, science. Results are verifiable. It's not like selling a perfume and claiming it'll make you sexier. Perhaps Holmes was blinded by her own self-grandeur. At what point does one cross from confident to delusional? Maybe once Holmes became massively invested in her promises, her ego rejected inconvenient facts. We see what we want to see. It's possible that Holmes was too hopeful: if she could buy enough time and throw sufficient money and effort at the problems, she could make the device work before everything blew up. It would be helpful to hear her side of the story, but (understandably) she did not cooperate with the author for the book.

Right or not, result is what matters in history. Unethical, even immoral, acts are minimized when great benefits result. Perhaps Theranos's frauds would not have mattered if, in the end, its technology worked. But it never had that potential. Scientifically, Holmes's pitch was simply wishful thinking.